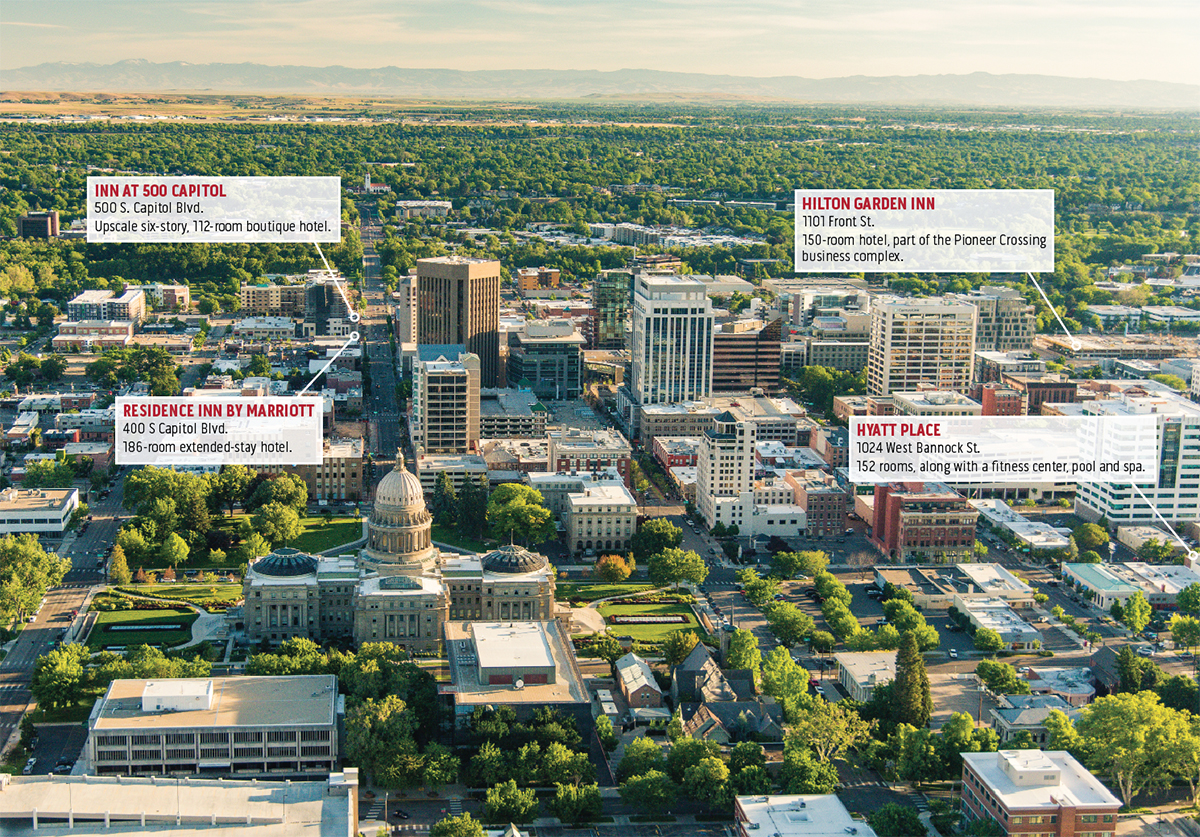 Like towering, multimillion-dollar weeds, new hotels seem to spring out of the downtown Boise concrete every other month. With The Inn at 500 Capitol and a Hyatt Place opening in the heart of the city this year and a Holiday Inn Express opening last fall by the Boise Airport—and two more on the way—hoteliers find themselves in an arms race for Boise’s prime real estate.

The surge in hotel construction shouldn’t be surprising considering hotel development dried up during the Great Recession, said Amy Parrish, director of sales at The Inn at 500. Seven or eight hotels were built in 2007 and 2008 immediately before the downturn. But none have been built since, and several hotels have folded. What’s more, the population for the five-county Boise Metro Area exploded by 21 percent from 2006 to 2016, according to the Idaho Department of Labor. Hotels were stuffed to the gills during the busy seasons, forcing many customers to look to hotels outside the downtown core.

In other words, Boise’s hotel industry was overdue for growth, Parrish said.

“It’s cyclical,” Parrish explained. “Even with the new hotels opening, people are calling and saying, ‘I can’t get a hotel room.’ There’s a real need still.”

The boom puzzles the public, said Kathy Pidgeon, general manager of the Riverside Hotel. Hotel professionals frequently hear that room sales can’t possibly keep up with all of the inventory coming to the market, especially once the Hilton Garden Inn is completed in Pioneer Crossing and Residence Inn by Marriott opens across the street from
The Inn at 500.

But Pidgeon said there’s plenty of business to go around for longstanding hotels, like The Riverside, and the newcomers.

“We hear it all the time: What? There’s another hotel? Please, not another hotel,” Pidgeon said. “But the report
we all watch has been trending up for a while. Hotel investors aren’t idiots. The people who loan them money aren’t
idiots, either.”

That report, the statistics bible of the hospitality industry, is the Smith Travel Accommodations Report (STAR). The STAR report remains bullish about both demand for hotel rooms in Boise and hotel rates, said Pat Rice, executive director of the Greater Boise Auditorium District. Average hotel room rates in the district were $105.57 per night in April—more than a $7 increase from the previous year—despite the new hotels coming online, according to the report.

Average room demand increased by 8,000 rooms during that time. (Total Boise room supply was 155,310 as of April 2017.) Part of that demand is explained by Boise’s convention space, the Boise Centre, attracting larger groups with an expansion that increased its floor space by 80 percent. In June, a national epidemiologist group brought 1,500 attendees to Boise, a demand influx that packed hotels throughout Boise and even into Canyon County.

The Boise Centre’s increased business isn’t only good for downtown Boise or for the hotel industry, Rice said. Many of the visitors he talked to planned to spend time exploring Idaho, providing a shot in the arm for tourism in Sun Valley, McCall, and elsewhere.

“People talked about staying for three days to raft on the Payette, or go exploring into Utah and Nevada, or heading out to the coast,” Rice said. “The larger conventions we can get here will definitely have a positive impact on the rest of the state.”

Boise’s growing business sector feeds demand for hotels, Parrish said. Albertsons brought approximately 250 people to its Boise headquarters after acquiring Safeway. Micron’s earnings rallied after reporting a series of losses, and Saint Alphonsus Health System and St. Luke’s Health System continue to try to bring in a stream of health care professionals as they race to cover the Valley with new hospitals and clinics. Lamb Weston, which competes with the J.R. Simplot Co. in the frozen potato market, became a stand-alone, privately traded company and moved its corporate headquarters from Chicago to the Treasure Valley.

“All of the expansion and revitalization in Downtown has drawn so many more visitors to the area,” Parrish said. “Boise has become a destination.”

Nobody in the Boise hotels game seems worried that there’s not enough business to share, Pidgeon said. But the numbers can change quickly, like they did in 2008.

“Oh, sure, we could get over-supplied,” she said. “The Boise economy is looking strong, and if it stays that way, it will support the new hotels. But all it takes is a downturn in the economy to have an oversupply. Everybody will be affected at that point.”